How Do Fibonacci Retracement Work?

The ratios mentioned above are the possible support or resistance areas. Applying these ratios to the difference between the highest and lowest price for a given period will help create price objectives. Traders usually look for a reversal signal on these Fibonacci retracement ratios before opting to open their positions. 0.618 is the widely used retracement value. It is the inverse of what has come to be known as the Fibonacci golden ratio (1.618), which is denoted by the Greek letter φ.

Drawing Fibonacci retracement levels is a simple three-step process. You will first need to identify the trend of the market. In case of an upward trend, you should attach the Fibonacci retracement tool at the bottom, drag it to the right as you move all the way to the top. As you do so, be sure to monitor the potential support levels (0.236, 0.382, and 0.618) 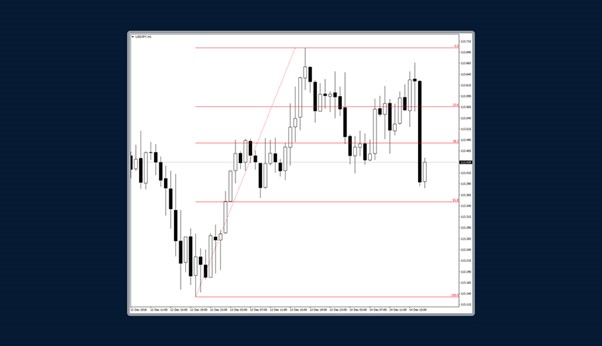 In the case of a downward trend, you should attach the Fibonacci retracement tool at the top and drag it to the right as you move all the way to the bottom. As you do so, pay attention to the three possible resistance levels (0.236, 0.382, and 0.618).

However, it is not an excellent idea to wholly depend on the Fibonacci retracements to make decisions. It will be prudent to look at the confluence signals. Confluence signals refer to the more reasons, apart from the Fibonacci retracement levels, why you need to take action regarding a particular position. Do not rush into making an assumption that because the prices have hit the Fibonacci levels, the market will reverse. In some cases, that might not be the case.

It will be important to combine the Fibonacci levels with indicators such as the Japanese Candlestick patterns, Oscillators, and others for a stronger signal.

Ignore this subheading for now. There is nothing to be calculated when it comes to Fibonacci retracements. Fibonacci ratios are simply percentages of whatever price ranges you choose to work with. However, it is the origin of these ratios that is quite fascinating. They are based on the golden ratio numbers as stipulated by Leonardo Fibonacci.

The concept of Fibonacci numbers works by forming a sequence of numbers starting from 0 and adding the prior numbers to form a string of numbers that looks like this:

All the Fibonacci ratios are based on some relationship between these numbers.

Fibonacci retracement levels have proven effective in placing entry orders, determining the level of stop losses, and setting price targets. For instance, a trader will observe the stock prices move high. After an upward move, the stock will retrace at 61.8% and again start moving upwards again. Because the stock is retraced at a Fibonacci level, the trader may decide to buy the stock.

It is important to note that, unlike moving averages, Fibonacci prices are static prices that can never change. The static nature of the Fibonacci prices is what makes them be identified quickly and easily. Testing these levels makes traders anticipate and react cautiously. The levels are simply the points where traders anticipate some action on the price. The action could either be a break or a reversal.

What is the Difference between Fibonacci Retracement and Fibonacci Extensions?

Traders usually confuse the two terms. Whereas Fibonacci retracement is where the percentages are applied to a pullback, the Fibonacci extension, as the name suggests, only applies the percentages to a move in the trending direction. For instance, assuming that a stock price moves from $10 to $15 and then back to $13, the price move from $10 to $15 is called a retracement. However, after reaching $15, the price further continues to rally towards $20, that is then referred to as an extension.

Although most traders usually rely on Fibonacci retracement levels to make a stock purchase and sell-out decisions, this technique is not one hundred percent perfect. First, the retracement levels only indicate where the prices might find resistance or support. However, there are no assurances that the prices will actually be in these positions. It is a matter of anticipation. For this reason, it is always important to also apply other confirmation signals.

Secondly, there are so many retracement levels, making it hard to know which one the price is likely to reverse. Traders usually struggle to identify which level is useful at a particular time. In the end, whenever a certain level fails, it is always argued out that the trader would have used another level.

Traders can also use Fibonacci retracements to guide them whenever they want to place stop-loss limits. For instance, assuming that the prices are on a continuous upward trend and you are holding a long position, one option you can consider working with is placing a stop loss just below a swing low rate. The swing low rate can also be looked at from the level of support perspective. This means that a falling price is deemed to recover before falling through the previous support level.

As you might have already noticed, the 1.618 is the most popular Fibonacci ratio. It is popularly referred to as the golden number. There are two valuable ways in which you can use this ratio.

First, traders can use this Fibonacci extension level as a target area of focus. In simple words, the 1.618 can help you to determine the natural price movements which occur on your charts all the time. The Fibonacci extension tool will help you know this level, which you can then use to place your targets. As such, having a clear understanding of these extension numbers can help you to predict where a likely area price could shift, especially when you are trading inline with the underlying trend.

Secondly, this Fibonacci extension could help locate price areas where a given price could exhaust once it has completed a natural movement to the 1.168 Fibonacci ratio. This will be important to a trader who notices a trend and is looking for ways to enter a move. The first option will be to wait until the prices return to a 1.168 extension level or use other signals to determine if the said price will continue trending in the same manner but on a larger timeframe.