What is a Japanese Candlestick?

Stock traders require the use of several trading tools. Japanese candlestick patterns are one of the perfect tools that traders use to analyze price movements. The whole concept of the Japanese candlestick patterns was pioneered by Munehisa Homma. In the course of his routine trading on the markets, Munehisa Homma noticed that the market of rice was majorly influenced by the emotions of traders. 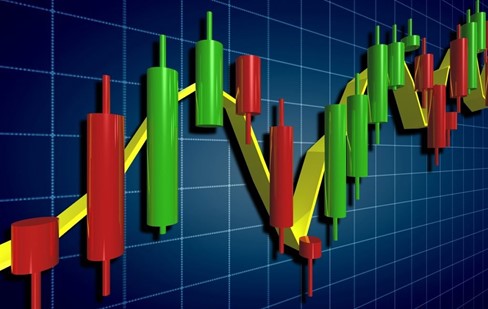 Homma then came up with a graphical display of the nature of price movements by denoting the differences using different colors. Traders could then use the candlestick patterns in identifying patterns of prices and then use the patterns to make investment decisions based on the short-term movement of the patterns.

As a veteran rice trader for financial instruments, Homma became a dominant player in the rice markets and became more famous for developing the candlestick pattern technique.

When the Japanese stock market came into existence in the 1870s, the Homma’s candlestick pattern technique was incorporated into the trading process. The technique was later introduced in the West by Steve Nison, an American-born technical analyst, through his book “Japanese candlestick Charting Technique.”

How Do the Japanese candlestick patterns Work?

Japanese candlestick patterns are effective because they provide more accurate price movements information. They have been proved to be more effective and precise than bar charts.  The patterns generally give a graphical representation of demand and supply behind very price action over a given period.

Suppose the security you are trading closes at a lower price than it opened within the trading period; the candlestick body will be black. In such a case, you will locate the closing price at the bottom while the opening price will be shown at the top. However, modern trading platforms have brought in more colors. Traders are at liberty to choose which color to use and in which circumstance.

Both bar charts and Japanese Candlestick patterns give similar types of information to traders. However, the major difference between the two is the graphical formats with which the information is represented. Candlestick patterns tend to give more clarity since they are more visual than bar charts. They give traders a clear insight into the price actions. Additionally, they display more graphically the demand and supply forces which are critical determinants of price movements.

The part above and below the body of a candlestick is known as the shadow. Both the shadow and the length of the candlestick are excellent indicators of the price actions.

The following are some of the most famous Japanese candlestick patterns.

Doji candlesticks tend to have similar open and close prices. The reason is that their bodies tend to be very short. Doji candlestick patterns are characterized by short bodies which appear as thin lines. See the image below.

They usually suggest great indecision and a great tussle between buyers and sellers. Prices will move above and below the open during the session and then close at, very near to the open price. In other words, a Doji candlestick indicates that the tussle results between the buyers and sellers ended in a draw and that there was no winner.

Spinning tops are Japanese candlestick patterns characterized by long lower and upper shadows and small real bodies referred to as the spinning tops. The color of the real body doesn’t matter a lot with this candlestick.

The spinning top candlestick pattern indicates a situation of indecision between buyers and sellers. The small body shows minimal movement between the bottom to the top. Additionally, the shadows show that both the sellers and buyers were in a tussle, but unfortunately, none emerged as the winner.

It also means that prices moved significantly higher and lower within the trading session despite the sessions opening and closing without any little change. Despite all these, neither buyers nor sellers could have the upper hand, and the result was a draw.

Suppose a spinning top candlestick pattern forms an uptrend, it usually means that there are not many buyers left, and a reversal is likely to occur.

If a spinning top forms during a downtrend, it means that there are no sellers left, and a reversal will most certainly occur.

Marubozu sounds a bit weird. Anyway, in the stock market, it is a common thing, not even close to being weird. It means that there are no shadows from the bodies. The Word Marubozu is a Japanese word that means “shaved head.” As such, the Marubozu candlestick is a shaved candlestick that has no shadow or wick.

Depending on whether the body of the candlestick is hollow or filled, the low and the high are usually the same as the body is open or close. 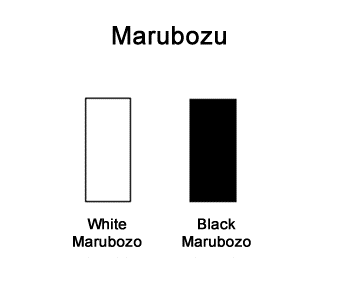 A white marubozu, as shown in the image above, has a long white body without shadows. Here, the open price is equal to the low price, whereas the close price is the same as the high price. In other words, a white Marubozu means that the candle opened at its lowest price and then closed at the highest price.

A white marubozu is an extremely bullish candlestick pattern because it means that buyers were dominant and in control throughout the entire trading session.

A black Marubozu is a bearish candlestick pattern because it shows that the sellers fully controlled the prices during the entire trading session. It also shows a bearish reversal or continuation.

The Spinning top patterns usually indicate the indecision that exists between the sellers and the purchasers of a particular stock element. 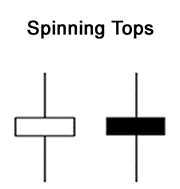 Whether a filled or hollow, a small body majorly indicates that the buyers and sellers were engaged in a tussle, but none had the upper hand. Therefore, the results were a standoff. If a spinning top forms when the stock prices are on an upward trend, it might mean that most buyers have left, and there is a looming reversal in the opposite direction.

However, suppose the spinning top forms when stock prices are on a downtrend, it indicates that most sellers have left, which could mean a possible reversal in the direction of the stock.