When you're in a short squeeze, it means that the price of shares is too low, and there is an imbalance between buyers and sellers. If this trend continues, then more people will buy the stock, which causes the share price to go up even higher. A short squeeze can be very profitable if you know when they happen!  We've compiled everything you need to know about short squeeze and Short Squeeze Stocks.

What is Short Squeeze Stocks?

A short squeeze stock is a term used to describe stocks that are involved in a surge of buying activity due to the fact that many investors are selling these particular shares short. This creates an upward momentum which forces more people to buy the high-flying stocks driving it even higher.

Short squeezes are essentially something that happens when very few people want to buy a particular stock, but many people want to sell it. This difference in demand creates an imbalance that forces the share prices higher as more and more investors look to "buy" stock at a high price.

What is a short squeeze? A short squeeze, also known as short-covering, occurs when traders who have sold a stock short are required to buy back the stock or cover their short position.

To short sell a stock, you first borrow it from your broker, then immediately sell it. Then at some later date, when you expect the price of the stock to drop, you buy it back for less than what you sold it for originally and return the shares to your broker.

Any event that would result in an increase in demand for a stock would trigger a short squeeze. Short interest replaces the shares borrowed by new short sellers, so if fewer shares are available to be sold short, the price will rise because the demand for borrowed stocks will increase relative to supply.

How does it do it? When you sell short, your broker borrows the shares you wish to sell from some other party. This is known as "borrowing the stock." If you are predicting that the price of a security to drop in the future, it makes sense that you would want to buy shares now while their value is low.

If more people are selling short, then there is demand for the shares to be shorted. This is because everyone who has borrowed these shares will have to return them sooner or later; thus, if they all want to sell at the same time, there won't be enough supply of stocks available. In this case, the price of the stock rises as people scramble for supply.

In order to reduce your exposure to the market, you can buy an option that allows you to essentially "sell" your stock at a certain price in the future. 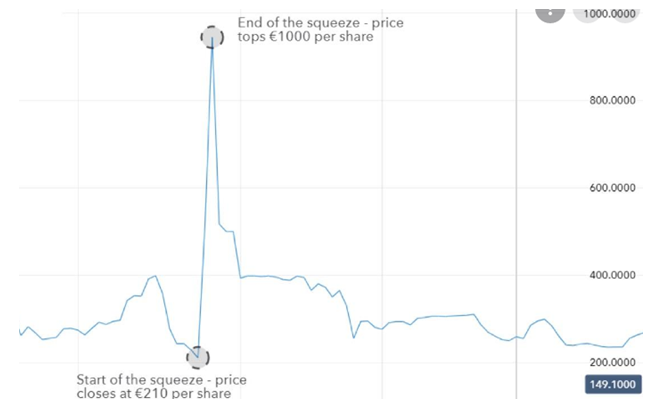 Periodically share prices will vary dramatically up or down due to news stories about the company that are coming out. This may cause the price of shares to rise or fall quickly in turn causing large paper losses or gains to shareholders.

To reduce the risk of this, you can "sell" your shares short- meaning that you borrow somebody else's stock and sell it at its current price with the promise to give them back their stock later when they ask for it. If the price goes down in the meantime, you make a profit on the difference.

If the price goes up, you are at risk of having to buy this stock for more than it is worth. This is why when you "short sell" you need to borrow the stock - if the stock rises in value while you have borrowed it, there is no way to pay back what its current worth is because your original stock is at an even further reduced value.

Many investors are very skeptical about shorting because it is so risky- not only can the stock rise, but the act of borrowing it to sell can be expensive and difficult to do, with most major brokerage companies refusing to lend out their stocks. Because shorting became increasingly popular in recent years, it is important to know the risks and benefits of shorting.

Short selling is used by investors that believe a stock will fall short in price or "short interest." Shorting can be very risky because you lose money if you buy back the stock at a higher price than its original value. This process becomes even riskier when traders use margin accounts, allowing them to borrow stock from their brokers to make a short sale. In case the price rises instead of decreasing, the investor will owe money to this account.

Shorting can be made much less risky by buying "in-the-money" puts or selling covered calls against your position. These are techniques that limit your risk while still allowing you to profit from a drop in stock price. You can also use short selling against the box to create a lower-cost basis for tax purposes if you've been holding onto a losing position for an extended period of time.

Workhorse Group Inc. (WKHS)- This is one of the firms that offer short squeeze stocks that struggled much, having a drop of about 73% in the past six months. They are following a lawsuit and, in case of any positive good news, would rejuvenate this short squeeze stock releasing about 36.7% of their stock float.

PayPal Holdings Inc.- PayPal deals with matters of financial transfer and makes one of the hottest investment themes that can give you the best short squeeze investments.

1. A short squeeze boosts demand for a stock and could cause a spike in its price as the number of buyers begins to outnumber those willing to sell at lower prices. In turn, this buying activity could push the share price higher as investors capitalize on the gains.

2. A short squeeze can also be seen as a vote of confidence by the market if a large number of short-sellers are forced to cover their positions. For this reason, it may indicate that there is positive news about a company that could be driving demand for its stock and thus pushing up the share price.

3. A short squeeze often occurs when investors take note of high short interest as an opportunity to profit from it. If the shares are trading at low levels, then the risk is seen as minimal, and there is great potential for short sellers who have committed to borrowing the stock in order to purchase it back at a lower price.

4. Short squeezes can occur when large shareholders of a company trade their stakes among themselves or if they are forced to purchase stock in the open market all at once to avoid a price crash and further falls.

The importance of understanding the short squeeze: You've probably heard about a "short position," meaning someone who has sold shares they don't own, expecting to buy them back later at a lower price. The opposite is true for those with long positions (these are people who believe that prices will go up). A "long squeeze" refers to what happens when traders or investors all try and close out their long positions as quickly as possible because prices have gone down too much. This can lead to an increase in volatility and even more downward pressure on stock prices. It's important for CEOs and CFOs alike to understand how the short-squeeze effect works so they can plan accordingly should it occur during their tenure.